Posted at 13:45h in Overhaul Projects, Projects by Ian Gray
One of our clients contacted us stating they were having major issues with one of their Peerless closed cooling water pumps, with the DE bearings failing.
Project

The Peerless XP was uninstalled and shipped to our workshop in Western Australia.

During the dismantling of the pump it was noted and on closer inspection, that the DE bearing had nearly completely disintegrated. If this pump had not been taken out of service it would have had a catastrophic failure.

During the FARO inspection a line was drawn through the centre of the pump casings. From this we could determine that the two bearing carriers were out of parallel by 0.4mm.

Failure mode of the DE Bearing we believe is down two 2 major factors. 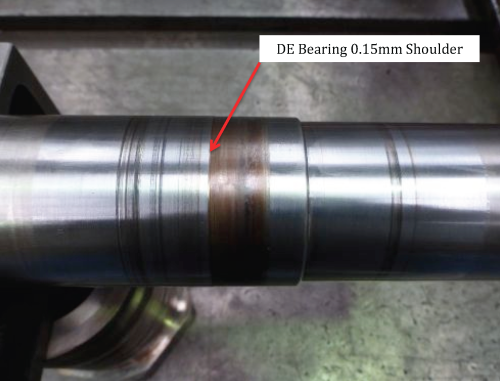 The pump shaft shoulder that the bearing inner race locates to had only a 0.15mm shoulder with a 0.1mm radius, the bearing as standard has a 1.5mm radius on its inner race, this would allow for the bearing to easily be cocked over the incorrect shoulder size on the shaft. As it shows clearly in the drawing not only is the bearing already riding up the shoulder of the shaft during fitting, it would also be very difficult to tell if this had occurred. The outer race was completely un-retained which makes it even more vulnerable to this also because of the radius on the shaft and on the inner race of the bearing, the bearing has already a position nearly 1mm closer to the NDE of the shaft.

The present design of bearing assembly. 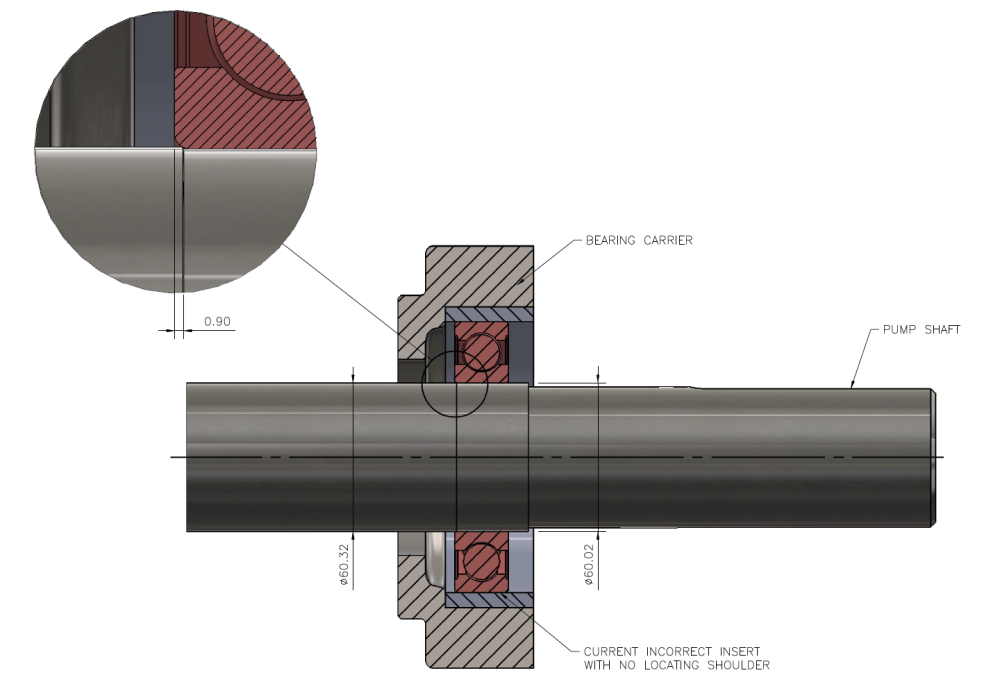 We believe this design flaw is a major contributing factor to the bearing premature failure, as it does not come close to standards as set out by the bearing manufacturer. To solve this DE bearing issue we manufactured a bearing carrier sleeve with the correct specification face area for the outer race of the DE bearing to butt to. This face was machined true and parallel with a minimum 4.5mm wall thickness as per the specific SKF bearing tolerances. This mating face was also brought forward towards the DE of the shaft by 2.92mm to ensure that the DE bearing inner race would be well clear of the shafts incorrectly sized shoulder that is cocking over the inner race. Effectively as shown you now have the outer race correctly retained. Ideally we would also retain the inner race with the correct specification shoulder too but this would have required manufacturing of a new shaft.

This caused damage to numerous parts some of which:

Excessive damaged at DE bearing journal, signs of severe fretting and galling. Shaft was HVOF coated and ground back to correct tolerances for correct bearing fit. The run out inspection was within tolerance.

Both shaft sleeves had severe damage at the mechanical seal location, due to the type of material used coating these were not an option so two new sleeves were manufactured. As we nor the client had drawings for these shaft sleeve we had to Re-Engineer these parts.

We found that the eye sides of the impeller wear rings were 40 to 70 percent over the design clearance thus causing excessive leakage and triggering a reduction in performance.

Case wear rings were 40 to 70 percent over the designed running clearance, causing excessive leakage and producing a reduction in efficiency. As we nor the client had drawings for these case wear rings we had to Re-Engineer the wear rings……Continue Reading

To solve the 2 major factors that caused the failure mode of the DE bearing we manufactured a bearing carrier sleeve, which allowed the outer race of the DE bearing to butt to (fig 2). This face was machined true and parallel with a minimum 4mm wall thickness as per the specific bearing tolerances. This mating face was also brought forward towards the DE to ensure that the DE bearing inner race would be well clear of the shafts shoulder once the bearings outer race is retained against the face of the bearing carrier. 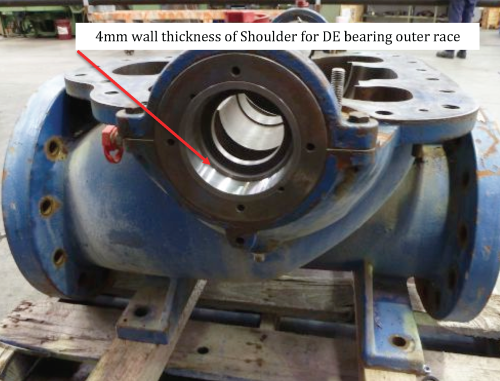 figure 2. Shows DE bearing carrier face that has been machined true and parallel with a minimum 4mm wall thickness as per the specific bearing tolerances.

After fitting the new bearing carrier sleeves to the NDE and DE bearing carriers we reassembled the carriers back into their bearing housings and to the bottom casing of the pump and then with the aid of the horizontal borer we bored out the DE and DE carriers, thus making sure once the bearings were fitted they would be parallel within ± 0.03mm.

Video of the bearing housings being line bored.

This was then confirmed via the FARO, dismantled and reassemble three times to confirm repeatability.

This modification will improve the longevity of the DE bearing as it will not allow the bearing to become cocked over, it will also guarantee the rotating element runs parallel thus not putting any undue forces onto the bearings .

Also during the rebuild process we paid close attention to the pumps running position and the setup of pumps TEF, so not to cause any additional issues thus causing a higher dynamic load on the new bearings or expansion tolerances.

Client went with our recommendations, the Peerless Pump was overhauled in our WA workshop, shipped to SA and pump was commissioned successfully by Pumpteq’s managing director Ian Gray on site on the 29/10/2014 and is running well with no bearing issues. 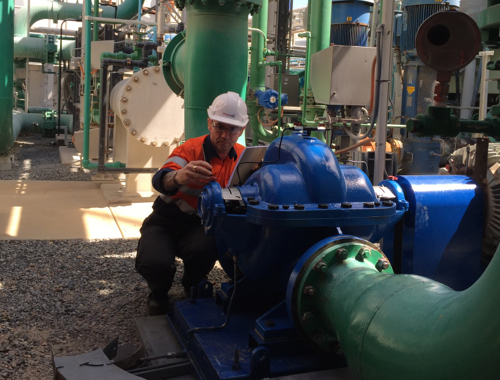 Peerless being commissioned on site 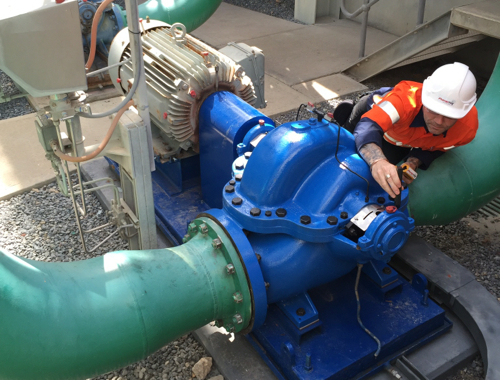 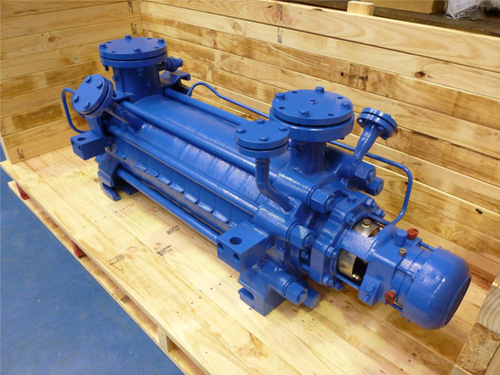 Clients Sulzer MC80-260 11 stage boiler feed pump had decreased in performance and was in need of an overhaul. 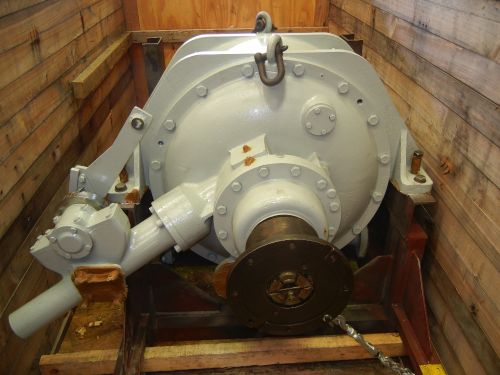 Whilst in service on a plant in SA. This fluid coupling is situated between a Siemans three-phase motor and a 6”/8” 10 stage boiler feed pump.
The unit was suffering from a large amount of vibration and was unable to adjust its speed.

One of our clients contacted us stating they were having major issues with one of their Peerless closed cooling water pumps, with the DE bearings failing. 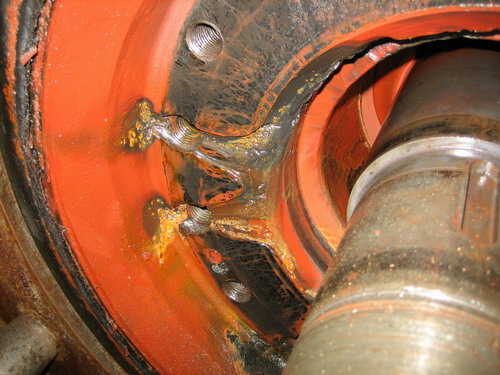 Due to recent pump failures and the findings of both mechanical component and gasket / o-ring condition a change of seal type is recommended. 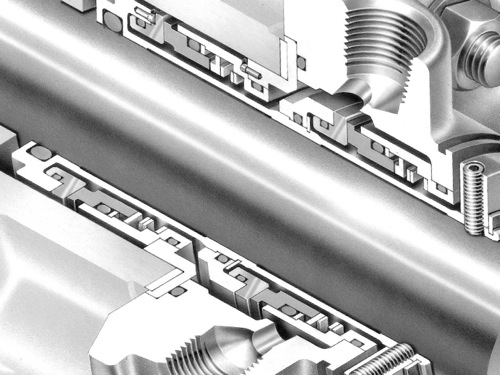 Failing of mechanical seals can have major implications on the performance of pumps. Here we look at a client whose power station has 12 booster pumps that feed their Sulzer HPT Pok30 boiler feed pumps where they have suffered numerous seal failures.

What are Swirl Breaks? 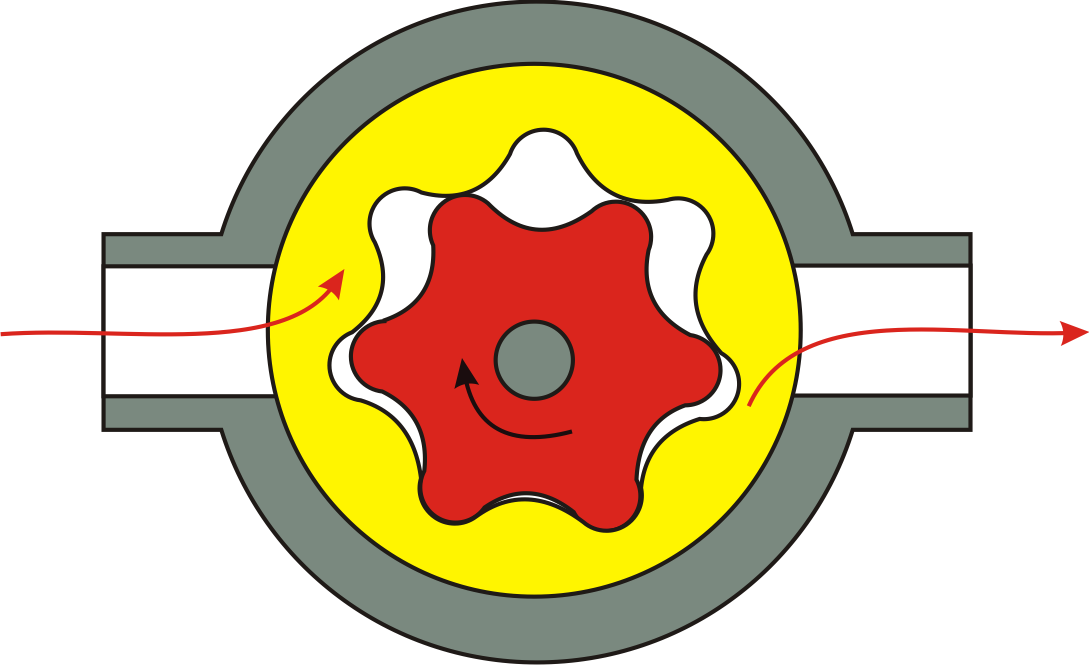 What are the different pump types?